View cart “Small silver Thor’s Hammer” has been added to your cart.

The Mjolnir of Ödeshög … Thor’s Hammer …

This is an amulet representing Mjolnir, hammer of the God Thor. The archaeological find is dated around 1000 and was found in Ödeshög – Erikstorp Sweden. The amulet thus dates from a period in which the conflict between ancient pagan tradition and new Christian foreign religion was in full swing . It also seems that wearing a hammer Thor is especially prevalent among the Nordic pagans as a reaction to the violent campaigns of Christianization . It thus marked as pagan its attachment to the Old Gods and loyalty to the tradition of his ancestors.

The original hammer was found Ödeshög in 1875 with a treasure of 100 gold coins . A true pagan treasure .On the bottom of Mjolnir can be observed interlacing whose symbolism relates to the labyrinth and the serpent biting its tail. The entanglement include the power of evolution and involution cyclical forces . On top of the hammer is two bulging eyes represent those of Thor when God enters the fury of combat. 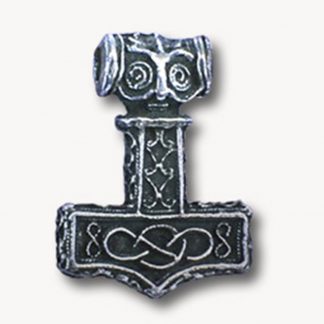