1 in stock (can be backordered)

This Thor’s hammer is based on a 10th century archaeological find from Fossi, Iceland.

Mjolnir: The Hammer of Thor
In Norse mythology, Mjolnir is the name of the hammer carried by the Thunder God Thor. Distinctively shaped, Mjöllnir is depicted as one of the most fearsome weapons, capable of leveling mountains.

Thor’s Hammer pendants were widely worn as amulets in the Viking era. Today they are worn by practitioners of Germanic Native Spirituality worldwide as a symbol of their faith. Whirling Sun is offering a large, solid and heavy Silver Thor’s hammer based on an original found in Fossi, Iceland. 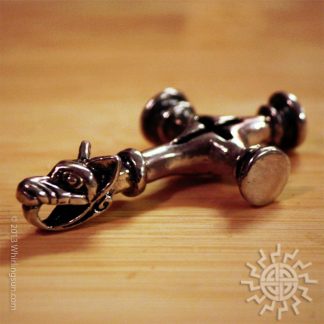