Wandervogel is the name adopted by a popular movement of German youth groups from 1896 onward. The name can be translated as rambling, hiking, or wandering bird (differing in meaning from “Zugvogel” or migratory bird) and the ethos is to shake off the restrictions of society and get back to nature and freedom. Soon the groups split and they originated ever more organisations, which still all called themselves Wandervogel, but were organisationally independent. Nonetheless the feeling was still of being a common movement, but split into several branches

The Wandervogel movement was officially established on 4 November 1901 by Karl Fischer, a former pupil of Herman Hoffmann Fölkersamb, who had formed a study circle at the boys’ Berlin-Steglitz grammar school where he was teaching in 1895. The Wandervogel soon became the pre-eminent German youth movement. It was a back-to-nature youth organization emphasizing freedom, self-responsibility, and the spirit of adventure, and took a nationalistic approach, stressing Germany’s Teutonic roots.

Be the first to review “Wandervogel silver pin” Cancel reply 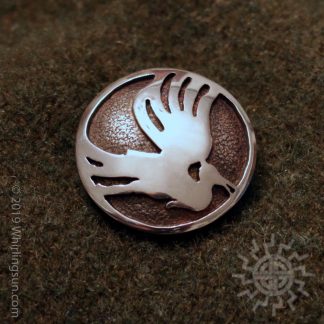